Promise Community Health Center invites the community to celebrate the completion of its capital campaign, exterior renovation and interior expansion.
The health center, which is located at 338 First Ave. NW, across the street from the Sioux Center city hall, is planning a ribbon cutting and open house for 4:30-6:30 p.m. Thursday, April 26.
The Sioux Center Chamber of Commerce will conduct the ribbon cutting at 4:30 p.m. People then will have opportunities to tour the health center. Hors d’oeuvres, wine, beer and beverages will be served.
“We are happy to share this special day with the community,” said Nathan Vander Plaats, executive director of Promise. “This project – and Promise Community Health Center – would not have been possible without the significant support we receive from our neighbors and friends in Sioux County and beyond. If you’ve ever wondered what Promise is all about, this open house is a great way to find out.”
Promise’s exterior has been transformed from a deteriorating, yellow, steel shell to a much more inviting and modern look.
The facelift was made possible thanks to the generous donations of many individuals and businesses. Promise launched a $250,000 capital campaign for the exterior renovation project in November 2016. The health center contributed to 50 percent of the cost, but it appealed to the greater community to donate the remaining funds to make the project a reality. More than $130,000 was raised in gifts.
Kevin Schmidt of Tucket’s Design of Sioux Center designed the building makeover. Schelling Construction of Sioux Center, the general contractor for the project, began construction work in August and is completing the finishing touches.
All four sides of the building have been renovated with a brick and EIFS finish. A new front doorway and floor-to-ceiling windows were installed on the west side. Promise’s awnings on the west and east sides were replaced with a modern lighted feature. A new entrance also was installed for the Los Palmas Mexican Grocery Store on the north side. Sidewalks were reconstructed to enhance safety.
“Everyone is so excited about the changes here,” Vander Plaats said. “Employees have a great, modern building to come to every day; patients have a warm, welcoming home for their health needs; and the community benefits from a more aesthetically pleasing building exterior. It seems any time I am out around town, I hear from our stakeholders about how nice it is to see the transformation of this building.”
Last spring, Promise also completed a 2,200-square-foot expansion and renovation project that filled the remaining vacant spaces of Sioux Center’s former bowling alley building. The interior expansion project included a much larger community education/conference room, two patient rooms and two offices. The vision/eye care program moved into one of the exam rooms, and the second exam room will allow for future growth. The two new offices are occupied by the executive director and chief financial officer.
The project also involved the remodeling and reuse of existing spaces, including the former conference room that has been divided into four office cubicles. The project also opened up an exam room and offices to better facilitate staff and services.

AT A GLANCE:
What: Ribbon Cutting and Open House
When: 4:30-6:30 p.m. Thursday, April 26
Where: Promise Community Health Center, 338 First Ave. NW, Sioux Center, IA
What: Ribbon cutting is set for 4:30 p.m. Tours of health center will be offered. Hors d’oeuvres, wine, beer and beverages will be served.

Why: Come celebrate the completion of Promise’s capital campaign, exterior renovation and interior expansion. Promise wants to thank the community for its support.

SEE MORE PHOTOS:
To see more photos of the finishing touches being completed on the building, view this Facebook post. 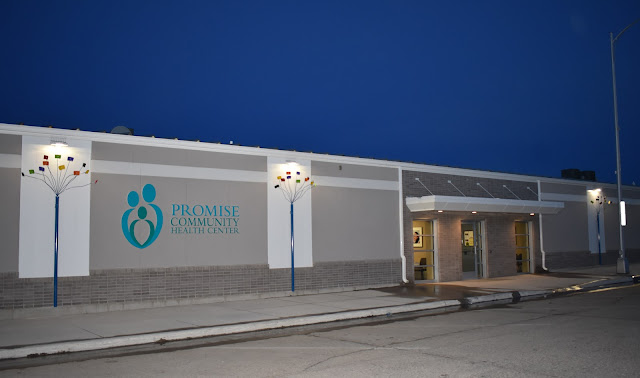