Promise Community Health Center’s first two Flu Vaccine Clinics were so popular this fall that it has decided to offer a third.

The flu vaccines will be offered 3-6 p.m. Wednesday, Nov. 29, at Promise, located at 338 1st Ave. NW, Sioux Center, across from the Sioux Center city hall. No appointments are necessary. People can walk in at any time during the flu clinic.

Promise provided 38 flu vaccine shots on Sept. 27 and 83 on Nov. 1 for a total of 121 – a rate of one shot every three minutes.
The influenza vaccine shots are free for youth 18 years old and under and $25 for anyone over 18 years old. Promise also accepts insurance to cover the cost of the flu vaccines.
According to the Centers for Disease Control, influenza is a serious disease that can lead to hospitalization and even death in rare cases. The annual flu season can begin as early as October and last as late as May. Since 2010, the CDC has estimated that, nationwide, hospitalizations caused by influenza have ranged annually from 140,000 to 710,000 and flu-related deaths from 12,000 to 56,000.
The annual vaccine protects against the influenza virus strains that research has indicated will be the most common during the upcoming flu season, according to the CDC. People are protected against those infection strains after antibodies are developed in the body about two weeks following the vaccination. The flu vaccine cannot cause influenza.
To learn more about the flu vaccine, visit the CDC key facts page at www.cdc.gov/flu/protect/keyfacts.htm. 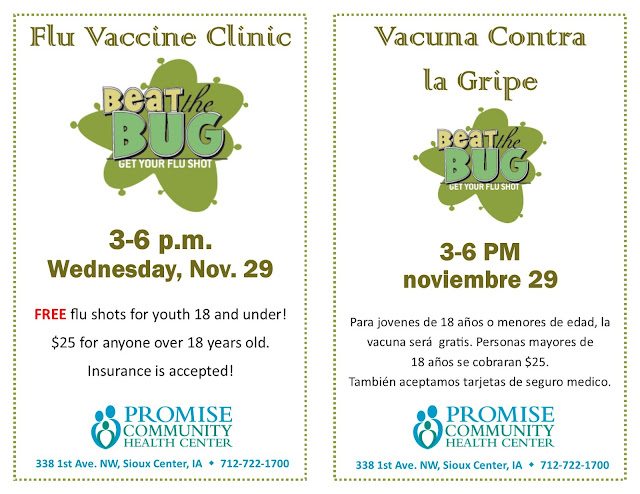